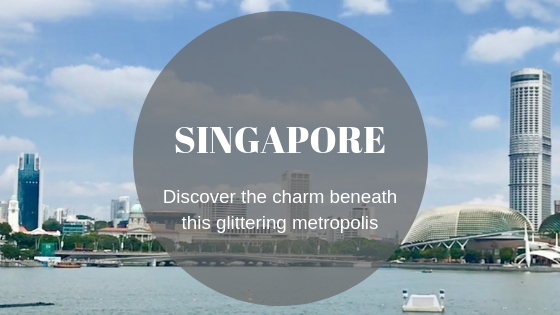 It took more than one trip for my impressions of Singapore to shift. I’m not entirely sure why. Perhaps its reputation for having restrictive laws gave me pause, but I LOVE cities. Living in and around NYC most of my life formed my strongly-held opinions about the ways cities should be, not that it is the standard (look at the subway system!). However, my impressions of Singapore did not match these opinions. I enjoy people watching over drinks, appreciate wandering through art museums and other cultural spaces, and I thrive off of places with serious vibes that pulse in your veins. Can’t I do those things there?

Singapore gave me the impression that it could offer all those things. Still, venturing around the “nanny state” did not invoke warm feelings at first. Clearly my impressions would need to change if I would be capable of viewing this place in a different light. Though let’s be clear, I’m not itching to jaywalk or spit out gum on the sidewalk or anything, but it would be nice to know it wouldn’t get me into hot water.

Either way, I went into this first trip with as much of an open mind as I could muster. All I had was a day to explore alone while my husband worked, which seemed like ample time based on my Pinterest research to wander somewhat aimlessly and focus on one or two attractions. Except, the universe had other plans when I awoke that morning feeling very ill. I resolved quickly to see whatever I could without pushing myself too hard (It would not have been cute to pass out while sightseeing alone). The ArtScience Museum seemed like just the place. It was a captivating and interactive display showing the beauty that can be created when art and science intersect. It was a nice way to boost my impressions of Singapore.

The museum is also located at the expansive – and expensive – Marina Bay Sands Mall. I’d never seen so many luxury brands and conspicuous wealth in one place. It was a veritable wonderland of celebrity chef restaurants – outside of Disney and Vegas of course. We dined at Gordon Ramsay’s Bread Street Kitchen for lunch and Wolfgang Puck’s Cut for dinner, and it was just as fantastic as it sounds.

I hadn’t unlocked the secret of why Singapore is a great place from this trip but did witness the key features most people know about.

The second time around, the hubby and I flew in to see Kevin Hart’s Irresponsible Tour then spent the next day exploring the city. I was determined to gain a new opinion of Singapore from the first trip. We mainly focused on two areas: Chinatown and Little India.

We ventured to Chinatown in the early afternoon for a VR experience at Virtual Room. We arrived early and used the opportunity to explore a nearby market. The items themselves weren’t of particular interest apart from the punny t-shirt I picked up, but outdoor markets, in general, are a great way to take in a city’s vibe. We were also really close to Sri Mariamman Temple and the Buddha Tooth Relic Temple but somehow missed it.

Now, if you’re at all familiar with Singapore, it would be understandable if you thought we sought out a hawker stall for some Hainanese chicken rice at this point. It may take a few more trips for Singapore to make a real impression on me. I mean, isn’t eating the national dish at the top of every tourist’s list? Somehow, after two visits I’ve yet to have a plate. We did the same thing in KL, missing out on the Teh Tarik. Instead, we walked to Little India in search of roti canai and biryani – soaking in the sites along the way. I think hunting the best-tasting roti is becoming a hobby, TBH. Little India did not disappoint.

Now it will be great to get back with the kiddos and discover more of what makes Singapore such an intriguing place. There are still so many more things to see to evolve my impressions of Singapore.

Where have you needed to visit more than once to get into it?

2 thoughts on “Getting a Feel for New Places: Going from Singapore? to Singapore! How Impressions Can Change Between Trips”