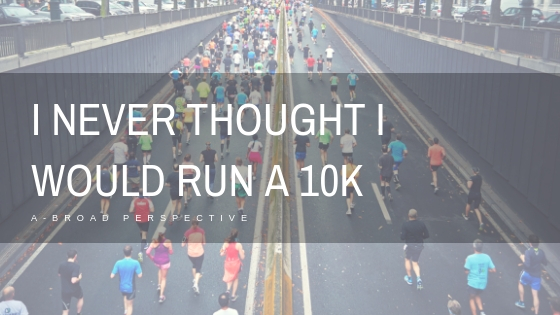 Let me start with an admission: I don’t like running. I ran some on my high school’s track team, and on occasion since then at the gym, or even outdoors when it’s the only option. It was not because I enjoyed it. More like because I wanted to hang out with friends or lose weight. What I was not doing was thinking about signing up to run in an organized event, yet I agreed to do just that earlier this year.

It started with the suggestion at my kids’ 3rd birthday party of running 10k in the Bangkok Marathon. Training would help me get back into pre-baby shape, I reasoned. In June I would have five months to prepare; more than adequate time. Although I’d never entertained the idea, on this occasion, I relented. I’m still perplexed by my decision. Maybe the sangria had something to do with it (I did whip up fire red and white pitchers for the party). Perhaps the more influential factor was moving to Bangkok with all the new experiences that have come with it.

I mean really, if I could relocate to the other side of the world, maybe I could give 10k a try?

That Monday I got to work. I’d never even attempted to run more than 5k, so it was time to see if I was capable of twice that distance. Training was not simple or always consistent, but I was determined to run this thing from start to finish. Most of the time I ran on the treadmill in my building with the pool as my fixed backdrop. Good running days were the ones I timed with when American sports were on TV. In September I started running with a small group in Lumpini Park.

Not only was I feeling stronger, but my confidence about my ability to get through this race was also growing. Along with just about everything else in my life, training got off course with our trip to the U.S. and then having a sick household for most of October. I pretty much spent most of Blogtober talking about how much things were turned upside down, but that’s life. I needed just to refocus and get in as much training as I could before the big day.

When the day arrived, I was nearly breathless with anxiety. As I put on the clothes, I set out the night before all I could do was remind myself that it was time just to get out there and put my preparation to use. The starting line was on Sanam Chai Road outside the Grand Palace. The early morning darkness was illuminated by the lights lining the street. People milled about in anticipation. I was ready.

Spotify delivered with a perfect playlist. What I don’t think anyone understands about races until trying it is the roller coaster of emotions during the run along with the unpredictable race factors that are unique to each event. I have a new admiration for the mental toughness of people who do full marathons and ultramarathons. By the time the sun came out, I was all done and had accomplished something I believed I never wanted to do.

I think that’s what made completing this 10k strangely so meaningful for me. It wasn’t about seeing if I would finally develop some unbridled love for running during this process. It was about pushing forward when challenged to see through a commitment, no matter how difficult things got. I needed to prove I could, contrary to what I was telling myself. It’s also strange to realize that this may not have happened at all had our family not made this move. As I meet new people, I’m finding out what new experiences I’ve been missing out on. This particular journey may not have made me love running, but it has shown me how to enjoy it.