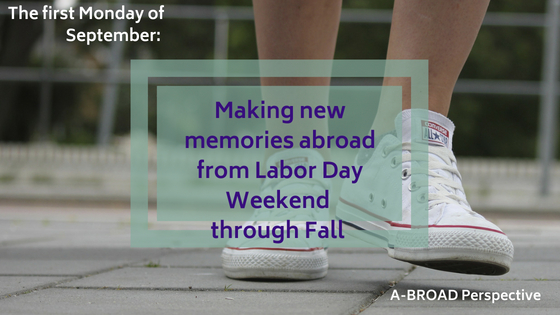 Labor Day weekend; often considered the last chance to enjoy summer before the pages turn on summer and the season of pumpkin spice lattes, falling leaves, and apple picking begins. As vacationers soak up the last bit of summer along coasts before Columbus Day (that only some workers are allowed the time off), I can’t help but think about what’s in store for the next few months. It’s ordinarily such a predictable time of year that constructing a vision of it at will comes easily.

This time around, I have no image to offer since it’s nothing I have experienced before. After watching so many seasons change in the Northeast, it’s unsettling not to have an idea what this time of year brings in a different locale. Well, I do know that there’s rain – lots of it – and this period of frequent rainfall will end sometime soon. [This site gives a great overview of Thailand’s rainy season.]

Labor Day Weekend is a similarly open book since it isn’t celebrated at this time of year. I have always known what this weekend – and the time immediately following – signified in the calendar year. Or I thought I did until I became curious about the origins of the holiday for the first time and did a quick search. I was a little surprised to learn that this moment set aside to celebrate workers’ contributions to the country has its roots in socialism. Or that the reason we celebrate it in September, rather than May 1st like Thailand and much of the rest of the world, can be attributed in some part to Grover Cleveland and New York City unions. No wonder the U.S. spends less time reminding us about its meaning than say, Memorial Day.

Now that I’m away from the place I have called home for so long, this time feels like a blank canvas unfolding before me. Instead of falling leaves and enjoying walks to the park to revel in the last lingering days before the chill of winter blow in, summer reigns eternal. On treks to the outdoor pool for swimming lessons, I’m reaching for a raincoat, rather than a sweater. It isn’t a seismic shift in the scheme of changes over the past several months but felt nonetheless.

It would be prudent of me in this time to dispense with the nostalgia of previous years and open myself up to the connections I can yet make to this time of year in Thailand. Without the luxury of prior years remembered to define what the next few months have in store, this weekend is a first step in making new connections.

One thing that endures, no matter where we are it seems, is my husband’s weekly ritual in front of the TV watching football – American football. The odd hours are no deterrent to ensure that he sees his team.

At least some things can remain as they were. Sort of.