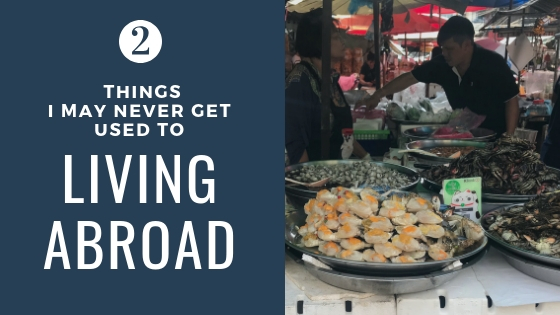 One of the most frequent questions people ask me about living in Bangkok is about what strange things I have encountered, which honestly feels like a trick question. I mean, how do I find one unsettling encounter in a sea of them? The things I find strange are so numerous that, like the bizarrely dressed people who liven up NYC streets, I can’t remember a single one in detail. Even common types of places and experiences only bear a slight resemblance to what I’m accustomed to. Maybe I’m looking at it like Jon Stewart in Half Baked, but in many cases, I’m also dealing with things that actually are slightly different than what I’m used to. It could be as subtle as the arrangement of grocery stores or as emphatic as the prevalence of malls in Bangkok.

Despite the multitude of changes, you’d really think from some of the questions people at home ask that I moved to Jupiter. Some of it is forgivable. It’s hard to envision a place you haven’t been. Though, I wonder if people who have recently moved to Charlotte or Houston are also getting questions about whether they have access to certain things. There is still this assumption that because I have left the comfy limits of the United States, I have also dispensed with the conveniences we know and love. I do miss being able to order items from Target.com and pick it up at my nearest store, but living abroad creates chances to live differently, in ways that may be more or less efficient – or convenient.

Two things that I continuously find odd in my day-to-day encounters, and I foresee as being the most challenging adjustment, are food and getting around the city.

Food: Noms from the perspective of a partially picky eater

It’s fantastically exciting to know, for instance, that every meal is an opportunity to discover new flavors, types of cuisine, restaurant ambiances – all the stuff that we glean from the abroad experience. I have even found a delicious pizza place that not only delivers a bottle of wine with a pie, but I can place the order via Facebook.

That is all well and good, but for me, there are always going to be days where all I want are regular pancakes like they make at Denny’s and not the fabulously decadent, dessert-like varieties one finds in abundance here.

Finding these comfort foods and even just regular meals outside the house can be a little exhausting. This rings especially true when restaurant meals for me often consist of lengthy study of a menu to select a meal in the hopes that it won’t be a horrible rendition of something you know and love (burgers and spaghetti fall into this category for me) or what I would call an “inter-cultural palate fail”. I’m also often deterred by ingredient overload. For me that’s boiled eggs in Asia and cheese in the U.S. It also doesn’t help when I’m not confident about what will be placed in front of me or when the images of the dishes are unappealing. There is a food delivery app like Seamless that I regularly use too, but it comes with its own set of limitations that often deter me from placing an order – though I can order Pinkberry so…

I know I know, it’s all part of the adventure to dive into an unknown culinary territory and discover new delicious foods – like Larb Moo, stir fried ramen noodles with Mama-brand noodles or any of the other foods I’ve adopted as staples. I love that part about living abroad, but I also crave the mundane foods I grew up with – like American-style Chinese food.

Strangely enough, I also miss foods that I hadn’t touched in America for years, like Oreos and peanut M&Ms. After eating the kind they sell in Thailand, I was weirdly nostalgic for the varieties that fill grocery and convenience store shelves all over the U.S. I think it’s like how people reacted when the company that makes Twinkies announced it was going out of business. Don’t worry, I’m still satisfying my persistent sweet tooth with a new appreciation for baked goods since I haven’t been brave enough yet to try the many varieties of strange gummies sold in stores. Seriously though, Saint Etoile more than makes up for the snacks I’m missing. I really didn’t know I loved baked goods so much until I had this one in the grocery store behind my apartment.

Transportation is another adjustment without a single solution that threatens even the most punctual to run a few minutes behind. Being a large urban center, Bangkok is overflowing with cars, buses, motorbikes, tuk-tuks, and bicycles. Bangkok streets make the chaos of driving in NYC seem like a Sunday afternoon drive in the countryside.

Now in Bangkok, with two three-year-olds, transport is more complicated since traffic is ubiquitous and legendary (everyone you meet has a story about being stuck in hours-long traffic). That eliminated a family vehicle from the equation because I refused to sit in traffic during excursions without my kids.

No more snacks buried in the seats!

Instead, I rely on motorbikes, ride-sharing apps, public transportation, and walking to get around while hubby takes his own motorbike about 1.4 miles to work each day.

This more flexible arrangement meant finding a preschool for the girls that offered roundtrip bus service. Although the school is only about 3 miles away or two train stops, it could take a half hour in a car, and my kids are absolutely not at a stage where they can cooperate taking public transportation. Hats off to all of you urban dwellers who patronize the public bus and train systems pushing strollers, wearing infants – and some toddlers – and dragging reluctant, defiant independent-minded children around vast, bustling cities. There were a couple of schools that are technically walking distance, but the idea of walking with my kids along the tiny alleys around my apartment at its most congested times of day was quickly abandoned. It is definitely a more stripped down version of what we were used to in the U.S., but it has allowed me to see so much more of the city and discover hidden gems.

There is a multitude of strange things we are adapting to each day of our adventure abroad, but for all of its quirks and bizarre turns, I have found that city living has been the most common denominator. Had we moved to a more suburban or rural place in Thailand, I have no doubt that the changes would have been more earth-shattering for our family. On the other hand, if 7 Eleven is as abundant out there as it is here, then maybe not. What would be the most jarring change if you moved abroad?

2 thoughts on “2 things I may never get used to: The new, the familiar and the downright strange”