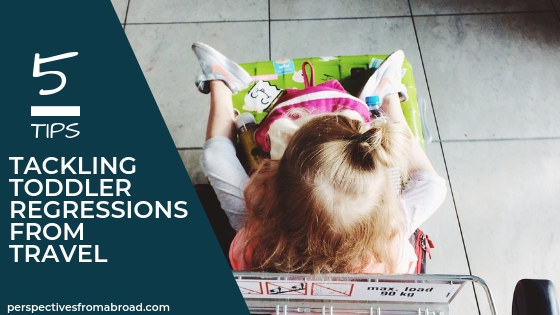 In my preparations to move abroad, I read quite a few articles about how toddlers may regress as a response to the change. This didn’t seem incredibly far-fetched considering the mountain of articles offering tips to help parents transition their kids from cribs to big kid beds, into new rooms – IN THE SAME HOUSE – and with toilet training lapses. The consensus among the voices on the internet was that sleep, speech, toilet training, feeding, and general behavioral regressions were fair game. These same voices also made it clear that this behavior needed to be met with empathy, reassurance, support, and understanding (Seriously, who doesn’t need some of this?).

I expected massive regressions since we traveled such a great distance and changed their routines so drastically. Despite knowing this would happen, I was still (somehow) woefully unprepared for the reality. Additionally, in true twin fashion, my girls chose different ways to regress just to keep us on our toes. In one of my previous posts, I eluded to how this played out early on with sleep. When that ship righted itself, it took an additional 3-4 weeks before we got their naps back on track. It helped to have an incredibly patient nanny to assist with implementing a schedule for them (More on finding your Nanny Poppins abroad another time).

After that experience, I was convinced we could handle any changes that came our way. For a time they even acted like we’d witnessed the worst of their toddler regressions. My mom, who watched the girls full time from the moment I returned to work from maternity leave, left us in February to return to the U.S. The girls acted as though we still lived a mere 40-minute drive away. Shortly after, they began attending a regular playgroup and then, half day Montessori sessions three days a week. No sweat. In fact, the mental stimulation and physical activity were helping them stick to a schedule. Yeah, about that…

A cluster of travel over three months, which included a couple of weekend trips to Railay Beach in Krabi and two weeks in the U.S. around the Easter holiday, was the spark that set off an explosion of regressive behaviors because it was near impossible to keep their schedule.

Since then we’ve seen all of the regressions mentioned above in response to just about everything. New school for summer camp, toilet training takes a back seat. One child gets a cold, the other decides she’s a baby.

Let’s face it; it’s what kids do. For toddlers, one step forward in a particular area (“Yay for putting your shoes on the correct feet all by yourself!”) can mean two steps back in another area (“Did you pee on the couch AGAIN?”). From a parent’s perspective, it can be a confounding thing to witness and leave you uncertain of just how to handle it. After coming to terms with the unassailable fact that this is completely normal, the next inclination is to figure out how to make it stop, and fast (maybe that was just me?).

What I hoped to find was a silver bullet. Call me naïve. Something like the baby whisperers who can put kids to sleep in seconds by just giving them a face massage. I haven’t found such magic yet. These are some ways we have gotten through these moments in our home:

Each phase of your child’s development can seem endless, but it’s important to keep a cool head (and a chilled bottle of wine) in these situations. Chances are, everything will be fine in short order; and if the behavior persists in a troubling way, make sure to see a pediatrician.